The Spectacular Snuffboxes of The Met 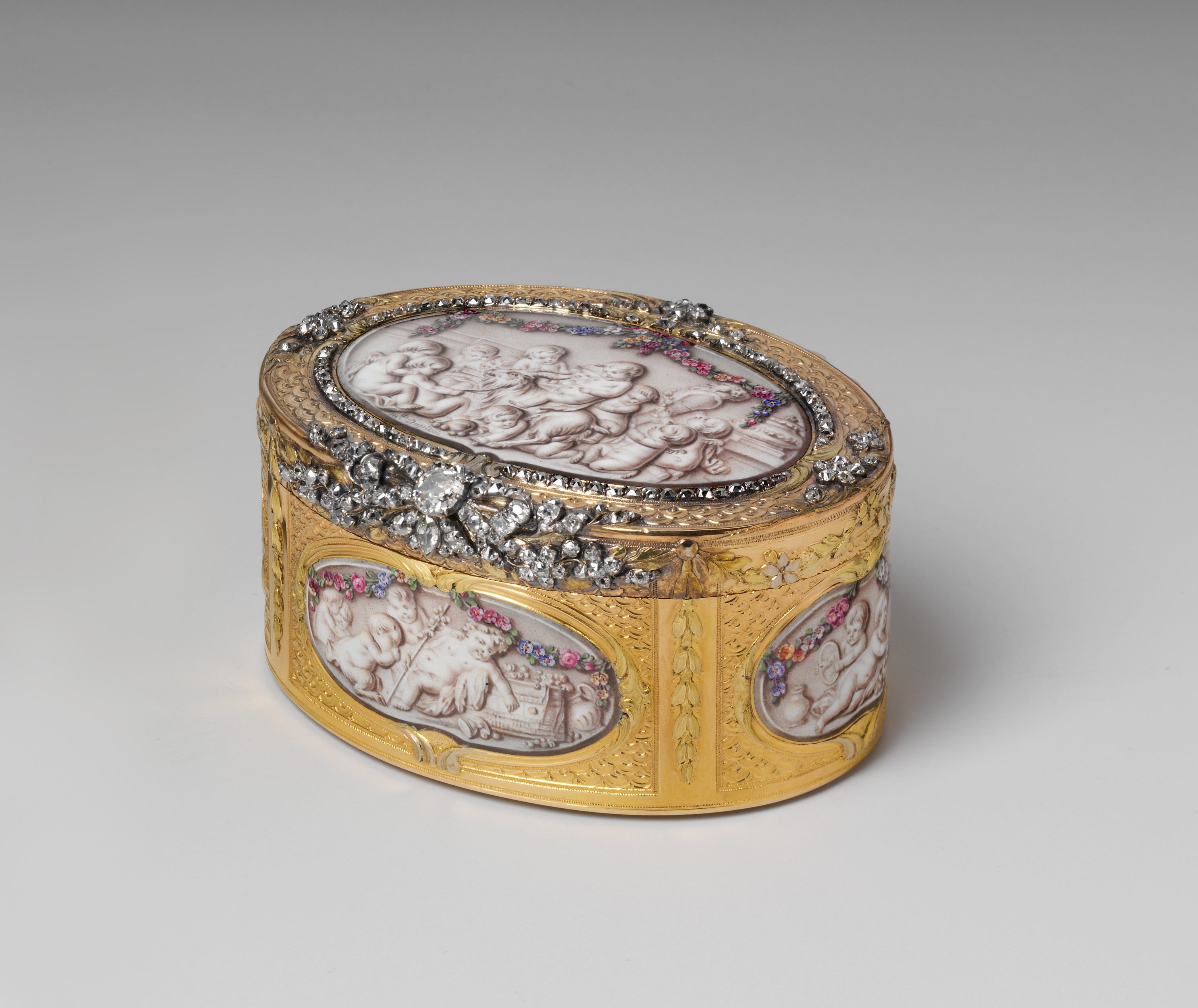 With so many monumental masterpieces vying for your attention—from Emanuel Leutze’s (American, b. Germany, 1816–1868) colossal Washington Crossing the Delaware (1851) to the imposing Egyptian temple of Dendur (completed by 10 B.C.)—you might overlook the Museum’s vast collection of sparkling snuffboxes: pocket-sized feats of decorative art.

These magnificent vessels originated out of a burgeoning Western culture of tobacco use. Prized for its medicinal properties and the enchanting effects of nicotine, tobacco was a revelation when it was first imported to Europe from the New World in the late 16th century. Enthusiasts sought a means of maintaining the precious potency of snuff—powdered or shredded tobacco leaves typically inhaled, chewed, or held against the gums—hence the invention of the snuffbox, which became a commodity as coveted as snuff itself.

Gilded, painted, bejeweled, and beyond, the following are but a small selection of exquisite snuffboxes on view at The Met.

This loudly ornamented snuffbox screams luxury. It was probably commissioned by the Prussian king, Frederick II (1712–87), alongside 125 similar objects known as the “Potsdam boxes.” Each is attributed to the Berlin-based English artisan Guillaume George Krüger, but this example is the only glass-bodied piece in the group.

On view at The Met Fifth Avenue in Gallery 951

Snuff didn’t become prominent in France until after the 1715 death of King Louis XIV, who disapproved of the habit. Fast-forward to the 1730s, when snuff was among the most fashionable French customs. By the time this extraordinary object was made by the master artisan Daniel Govaers, the snuffbox was a statement piece that spoke volumes about the owner’s discerning tastes—and their ability to afford items of such excellence. This gold and diamond example in the early Rococo style was the most expensive type of snuffbox that money could buy.

Snuffbox in the form of a slipper

The demand for snuffboxes extended across classes, and many were produced in less expensive materials such as porcelain for those who couldn’t afford bespoke boxes dripping in diamonds. By the mid-18th–century, snuff was so entrenched in Europe’s social culture that merchants would advertise new boxes with each season as they would a style of dress or shoe. This slipper-shaped example, produced by the French porcelain factory, Mennecy, nods to the snuffbox as a must-have fashion accessory.

On view at The Met Fifth Avenue in Gallery 538

Snuffbox with portrait of Catherine II, Empress of Russia

Joseph Etienne Blerzy is the keen-eyed craftsman behind some of The Met’s most impressive snuffboxes. He ranked among the 18th-century Parisian goldsmiths celebrated for their finely made personal objects, some of which were customized with miniature portraits. This gold and enamel snuffbox features the painter Nicolas Soret’s (Swiss, 1759–1830) small-scale portrayal of Empress Catherine II, whose delicate likeness is elevated by a diamond border. Such opulent snuffboxes were frequently presented as royal gifts.

Paris set the gold standard for luxury goods in the 18th century, and this colorful Swiss snuffbox exhibits the artisan’s appreciation for Joseph-Étienne Blerzy. Its decoration is so characteristic of Blerzy’s craftsmanship that it was likely designed after one or more of the Frenchman’s works. Most Swiss makers from the last quarter of the 18th century remain unidentified, but they probably worked out of Geneva, a city long renowned for its watchmaking industry.

On view at The Met Fifth Avenue in Gallery 951

This glorious gold snuffbox is attributed to the goldsmiths P R and George Michael Moser (1706–1783). Even without the glittering gemstones and colorful enamels of its neighbors in The Met collection, this head-turning box holds its own with a dramatic carving of the Roman hero Mucius Scaevola demonstrating his bravery by holding his hand in a blazing fire. The circumstances of its commission are unknown, but it clearly showcases the fruits of Britain’s booming mid-18th–century economy, which brought with it a taste for sumptuous visual delights and an alluring new pastime: shopping.

On view at The Met Fifth Avenue in Gallery 512

On loan to The Met, this exceptional American snuffbox made by Samuel Johnson and engraved by Peter Rushton Maverick (American, 1755–1811) was one of five gold boxes presented to patriots of the American Revolution. This particular box was created for John Jay, who was celebrated for his role in negotiating peace with Britain, and who signed the pivotal 1783 Treaty of Paris, which ended the Revolutionary War. Jay would go on to become the first chief justice of the United States and the second governor of New York, by which he declared that all children born to enslaved parents in New York State would live free. Of the American-made snuffboxes in The Met collection, this one stands out for its historical importance and European-style richness.

On view at The Met Fifth Avenue in Gallery 753

A colorful bird sits atop a bounty of fruits in this British-made, enameled-copper vessel, which exemplifies the snuffbox's diversity of design and decoration.

On view at The Met Fifth Avenue in Gallery 512

Snuffbox with six scenes of putti at play

Gold and enamel and diamonds—oh my! This splendid French snuffbox in the emerging Neoclassical style boasts remarkable handiwork by its maker, Jean Georges, and Mademoiselle Duplessis (French, active ca. 1753–60), who so brilliantly executed the miniature scenes of playful putti.

This sturdy double-snuffbox of brown agate and gold provides separate compartments for two forms of snuff. Although Saxon artisans employed hard stones in snuffboxes earlier in the 18th century, Nicolas Bouillerot was one of the first Parisian goldsmiths to do so. This box is also notable for its larger size, which suggests that it was intended for communal use.

This striking porcelain snuffbox, manufactured in Vienna during the tenure of factory director Claudius Innocentius Du Paquier, features complex decorative schemes including playing cards and a game of chess. Enigmatic inscriptions suggest that it was intended as an intimate gift for a recipient who would have understood its coded message.

On view at The Met Fifth Avenue in Gallery 533

Can’t get enough of the decorative arts? The Met Store is your one-stop shop for artful interpretations of Museum treasures by decorative artists such as Louis Comfort Tiffany and Peter Carl Fabergé. Find Met-inspired home decor, jewelry, accessories, and more online and in-store.