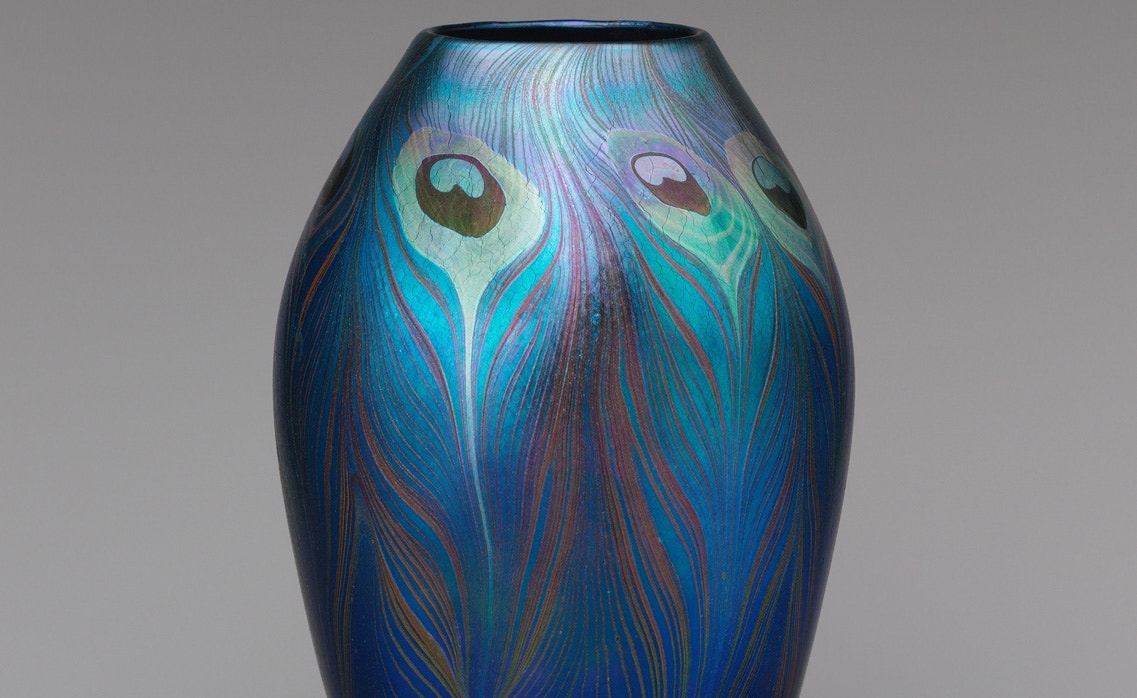 During the second half of the 19th century, artists and designers embraced the motif of the peacock feather, taking inspiration from its striking colorations and its association with resurrection, renewal, and immortality. Emblematic of the British Aesthetic movement of the 1860s–80s, which championed “art for art’s sake,” the delicate and exotic peacock feather suggested ethereal, multisensory experiences. In 1876–77, the artist James McNeill Whistler featured the bird in his controversial “Peacock Room” for Sir Frederick Leyland’s London dining room, which may have influenced Aubrey Beardsley’s cover design for Salome by the Victorian playwright Oscar Wilde . Shortly thereafter, the British designer and social reformer William Morris created a woven curtain fabric called Peacock and Dragon, one of his most popular designs. Across the Atlantic, Louis C. Tiffany was also enchanted by the dramatic hues and iridescence of the peacock, which would come to be considered a signature motif—seen in his brilliant mosaics, jewelry, metalwork, and blown-glass Favrile creations. In 1892, Louis C. Tiffany and his colleague Samuel Colman were invited to decorate the New York City mansion of Henry and Louisine Havemeyer, two of the designer’s greatest champions and patrons. Among the mosaic panels created for the Havemeyer project was a dazzling work for the shimmering entrance hall. The focal point was an overmantel glass mosaic featuring two symmetrical peacocks (below). 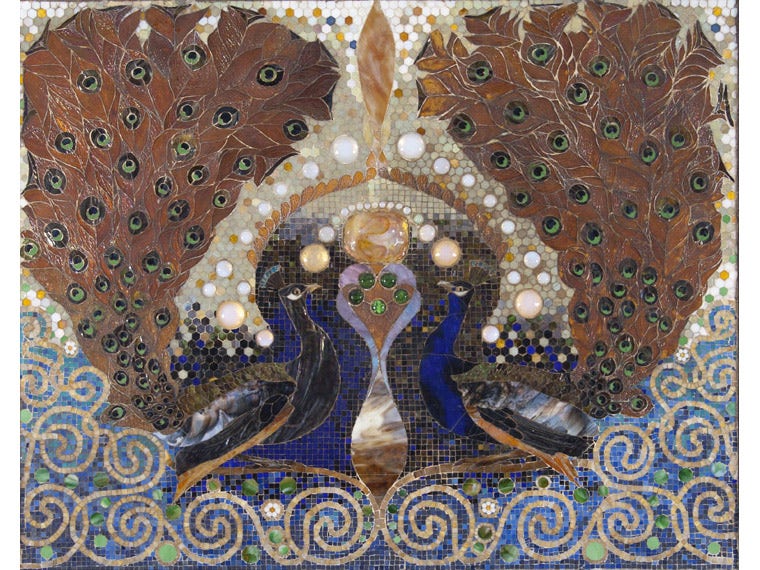 The following year, the Tiffany Glass & Decorating Company produced an award-winning chapel for display at the 1893 World’s Columbian Exposition in Chicago. Behind the chapel’s altar stood a sumptuous, glittering wall (reredos) covered with glass mosaics decorated with two facing peacocks, which were apparently inspired by the Havemeyer pair. The chapel's birds are surrounded by a vine emblematic of the Eucharist. In this extraordinary, three-dimensional, multimedia chapel, Louis C. Tiffany combined his love of natural motifs and his innovative stained glass in service of spiritual uplift. According to Laurence J. Ruggiero, writing in The Tiffany Chapel at the Morse Museum, “It was reported at the time that visitors to the chapel were so affected by religious emotion that men doffed their hats in response.” This impressive tour de force was painstakingly reassembled in 1999, and is now on view at the Charles Hosmer Morse Museum in Winter Park, Florida. Peacocks also found their way into artful glass objects by the Gilded Age master. In March 1897, the New York Tribune reported: “There is now on exhibit at the Tiffany Studios, 333 Fourth Avenue, a remarkable collection of blown glass, the latest efforts of Louis C. Tiffany. The beauty and gorgeousness of the peacock suggested to his mind that he might obtain in Favrile glass similar color effects. After a series of experiments, he has succeeded in producing numbers of vases and plaques, where the color … and form … of the peacock has been carried out, not in a purely realistic manner, but with just enough realism … to bring to mind the brilliancy and color of its plumage. It happens that this peacock glass comes before the public at a most appropriate time [Easter], as the peacock was regarded by the primitive Christians as the symbol of the Resurrection.” Of the same exhibition, the Brooklyn Daily Eagle wrote: “It would seem as if Mr. Tiffany in this Peacock Favrile glass had reached the highest point in his art.” 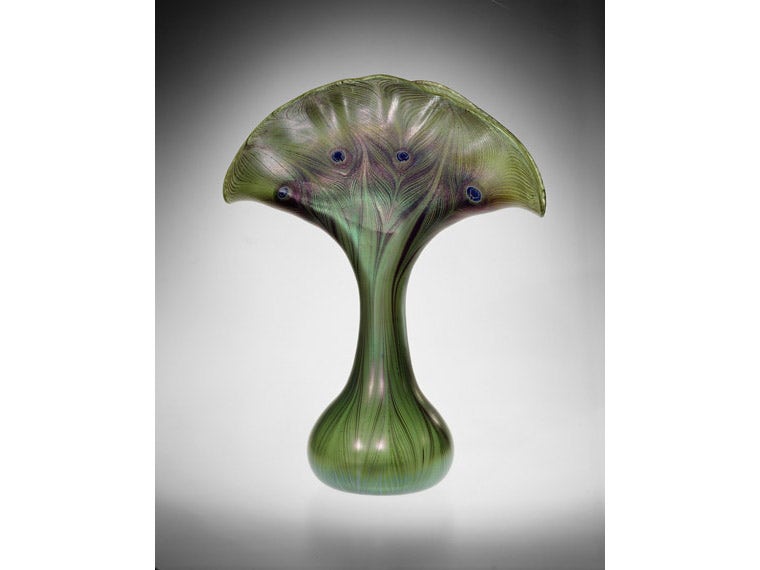 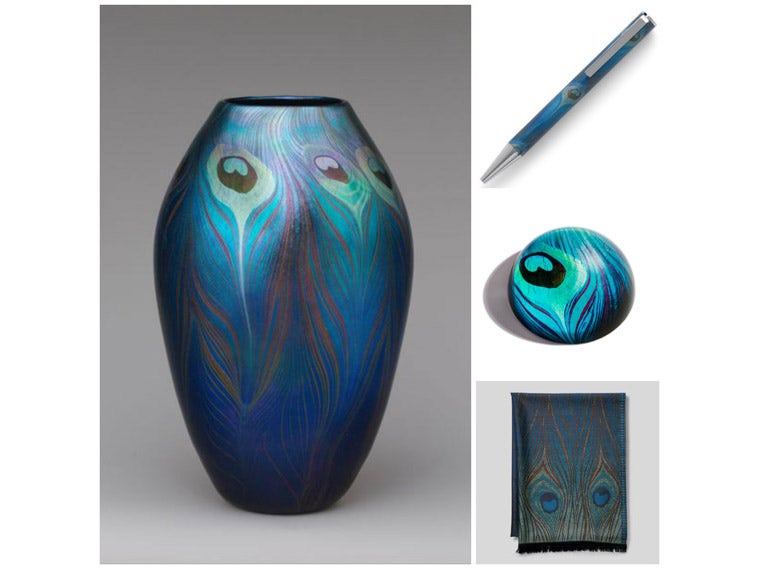 The peacock motif again took center stage on May 16, 1914, at Laurelton Hall, L.C. Tiffany’s grand country house in Oyster Bay, Long Island. Here, the wealthy designer invited a handpicked list of notables from New York society to a so-called “Peacock Feast,” in which stuffed peacocks were paraded on platters before the astonished guests, who then dined on “peafowl, frog legs, and turtle truffles,” according to contemporary accounts. 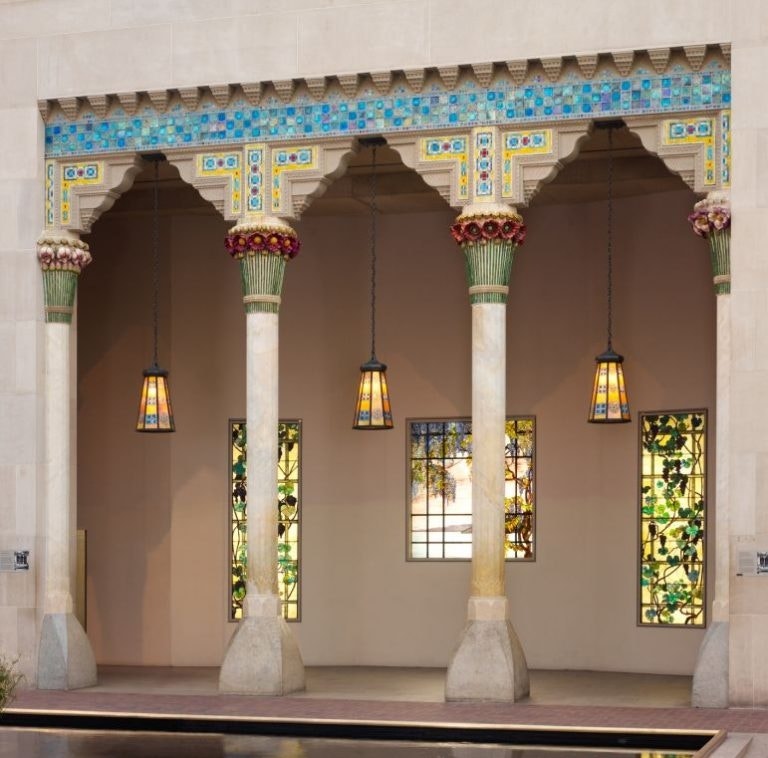 The great estate—which the New York Times once reported “contained 82 rooms, 25 baths and a fountain in an interior courtyard”—was consumed by fire in 1957, but The Met is fortunate to display Laurelton Hall’s original ceramic loge and columns in the American Wing (above). 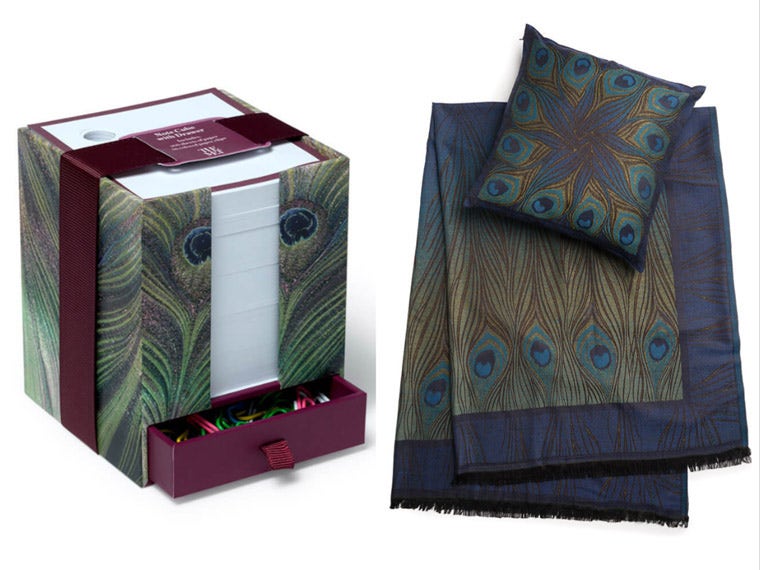 The peacock lives on in our range of inspired designs based on the work of L. C. Tiffany, whose February 18 birthday we celebrate today. Items pictured above, and many more, are available at The Met Store.
← Previous Next →
Related Posts