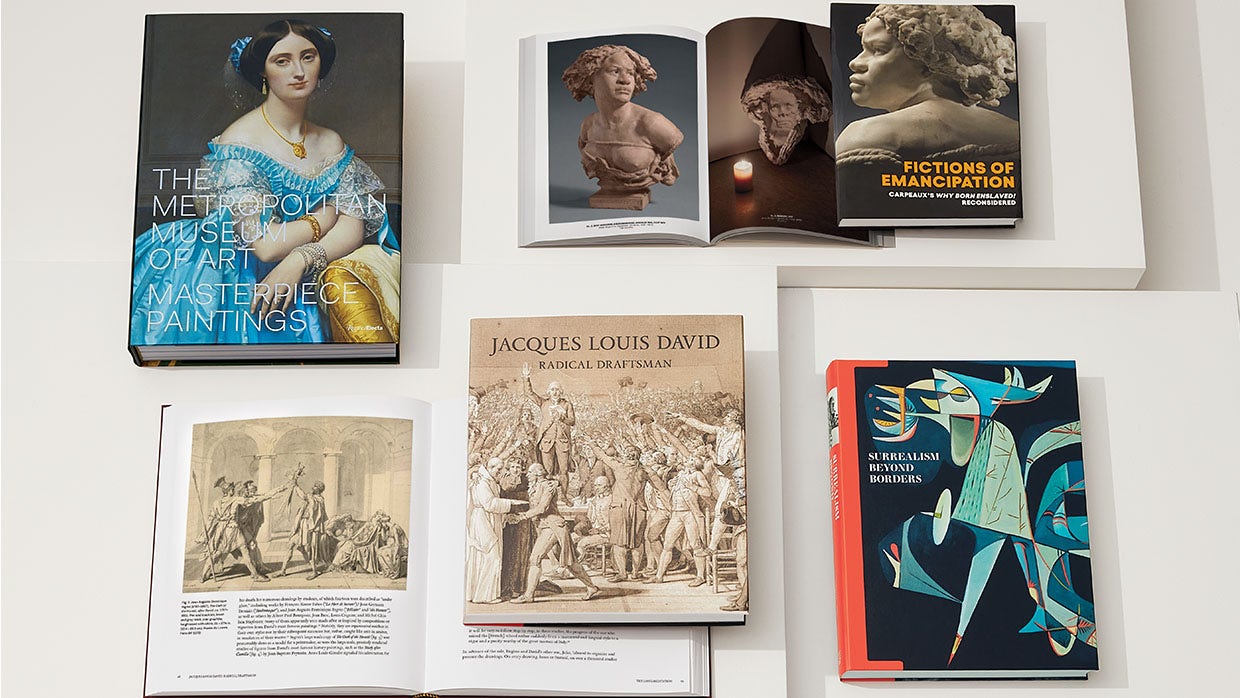 We’ve assembled our newest and most in-demand exhibition catalogues and art publications of the spring season so far, including such best sellers as Jacques Louis David: Radical Draftsman, Before Yesterday We Could Fly: An Afrofuturist Period Room, and Inspiring Walt Disney: The Animation of French Decorative Arts. Read on to see our top picks.

Boasting 140 color illustrations, as well as insightful essays Met curators and contributions by other leading scholars, Winslow Homer: Crosscurrents focuses, for the first time, on the watercolors and oil paintings Winslow Homer (American, 1836–1910) made during visits to Bermuda, Cuba, coastal Florida, and the Bahamas. Recognizing the artist’s keen ability to distill complex issues, the publication upends popular conceptions and convincingly argues that Homer’s work resonates with the challenges of the present day.

French American artist Louise Bourgeois (1911–2010) is celebrated today for her sculptures. Less known are the paintings she produced between her arrival in New York in 1938 and her turn to three-dimensional media in 1949. Louise Bourgeois: Paintings explores Bourgeois’s relationship to the New York art world of the 1940s and her development of a unique pictorial language, adding a key element to our understanding of this crucial artist’s career.

This critical reexamination of Jean-Baptiste Carpeaux's (French, 1827–1875) iconic bust Why Born Enslaved! unpacks the sculpture’s complex and sometimes contradictory engagement with an antislavery discourse. Noted art historians and writers discuss how categories of racial difference grew in popularity in the 19th century alongside a crescendo in cultural production in France during the Second Empire. This volume also explores such key themes as the portrayal of Black enslavement and emancipation; the commodification of images of Black figures; the role of sculpture in generating the sympathies of its audiences; and the relevance of Carpeaux's sculpture to legacies of empire.

In America: A Lexicon of Fashion Exhibition Catalogue

Complementing The Costume Institutes two-part exploration of the history of fashion in the United States, In America: A Lexicon of Fashion establishes a modern vocabulary of American dress based on its expressive rather than practical qualities. Featuring over 100 garments from the 1940s to the present, this title offers a vibrant perspective on the United States’ sartorial legacy while also illuminating its multifaceted present and the diverse creative forces shaping the nation’s future.

Jacques Louis David’s (French, 1748–1825) paintings are among the most iconic in the history of Western art, but comparatively little is known about the artist’s nearly 2,000 drawings. Jacques Louis David: Radical Draftsman is the first major publication to focus on the often years-long process of trial and experimentation that progressed from initial idea to finished canvas. Essays by international experts on the artist explore how David’s preparatory works on paper reveal the development of his creative process, while also bearing witness to the tumultuous years before, during, and after the French Revolution.

This title spans the whole of Charles Ray’s (American b. 1953) 50-year career, from his early photographs and performances through his intriguing, often unsettling sculptures, some of which are published here for the first time. The essays foreground the artist’s engagement with preexisting traditions, as well as charged issues around race, gender, and sexuality (notably expressed through his explorations of Mark Twain’s 1884 novel Adventures of Huckleberry Finn) and investigate the modalities of touch that run through his work. In addition, a reflection by Ray himself and a conversation between the artist and Hal Foster offer further insights into his multifaceted practice.

Before Yesterday We Could Fly: An Afrofuturist Period Room Bulletin

Seneca Village—a vibrant 19th-century community of predominantly Black landowners and tenants—flourished just west of The Met's current location until the city used eminent domain to seize the land in 1857, displacing its residents to make room for the construction of Central Park. The Met's Winter 2022 Bulletin, Before Yesterday We Could Fly: An Afrofuturist Period Room, imagines a different history in the form of a new type of installation that departs from traditionally Eurocentric period displays to present a fictional but resonant domestic space. The publication also includes an original graphic novella by New York Times best-selling author and illustrator John Jennings.

Exploring the novel use of French motifs in Disney films and theme parks, Inspiring Walt Disney: The Animation of French Decorative Arts features 40 works of 18th-century European design—from tapestries and furniture to clocks and porcelain—alongside 150 Disney film stills, drawings, and other works on paper. The text connects these art forms through a shared dedication to craftsmanship and highlights references to European art in such films as Cinderella, Sleeping Beauty, and Beauty and the Beast.

Find these titles along with other art catalogues, museum and collection guides, fashion publications, and coffee table books on our website.